Fusarium head blight (FHB) is a fungal disease of cereal crops that affects kernel development. The most important cause of FHB is the fungus Fusarium graminearum, which causes significant losses in grain yield and grain quality, while also resulting in the production of mycotoxins that affect livestock feed, the baking and milling quality of wheat and the malting and brewing qualities of malt barley. The Canadian Grain Commission allows very little FHB (expressed as fusarium damaged kernels, i.e. FDK's) tolerances in top grades. FHB-infected seed often reduces levels of germination and seedling vigor. For more information, see: Fusarium Head Blight of Barley and Wheat

What is the host range of FHB?

FHB has a wide host range that includes all small grain crops, corn and many wild and tame grass species.

What is the life cycle of FHB pathogen?

The main pathogen that causes FHB typically overwinters in crop and grass residues on or in the soil, as well as in seed. Seedlings can become infected at emergence. Wind-borne spores are formed in fruiting structures formed on old infested crop residues and are then spread by wind to infect florets when the grain is at the flowering stage. Warm, moist weather worsens the infection. A second rain-splashed spore stage can form on infected head tissue.

What are the symptoms of FHB?

The common symptom is premature bleaching or blighting of heads. Partially blighted heads are most common. Florets may have a pinkish or orangish appearance near their base. The seeds in blighted heads do not fill properly and appear shriveled and bleached. See photos: FHB Symptoms (1)

How does FHB spread?

What is the FHB situation in Alberta?

FHB is caused by several species of a fungal pathogen, Fusarium. The most important Fusarium species affecting Alberta is Fusarium graminearum. Results regarding the occurrence of F. graminearum, based on testing by a range of private and public organizations using different methodologies and involving a range of plant tissues (e.g. seed, heads, crowns, and nodes), have been consistent. F. graminearum was either not or infrequently isolated from seed and crop residues from central to northern Alberta. In contrast, F. graminearum was more frequently isolated from seed, cereal residues, corn residues, and head tissues from fields in southern Alberta, especially under irrigated production. Moreover, over the period from 2001 to 2008, this pathogen is being isolated with increasing frequency, especially in southern Alberta. Outside of southern Alberta other less damaging species of Fusarium are typically associated with FHB symptoms. F. graminearum is listed as a designated pest in the Agricultural Pests Act. A laboratory certificate showing that the seed lot in question was tested and found to be non-detectable for F. graminearum must accompany all cereal and corn intended for use as seed in Alberta. See Alberta Agriculture and Rural Development's Fusarium graminearum Management Plan: Alberta Fusarium Graminearum Management Plan

What can be done to reduce the risk of FHB on my farm?

Producers must avoid planting seed that is infected with F. graminearum. Seed of susceptible crop species must be tested by a seed testing laboratory and only seed with non-detectable levels of F. graminearum is to be used for seeding purposes.

Although infected seed can cause seedling blight, it typically does not directly give rise to head blight symptoms in one growing season. The fungus will move from the infected seed to the root, crown and stem base tissues of the plant that develops from the infested seed, thus creating potential sources of infested residue that can impact subsequent crops. Buildup of the pathogen would typically be favoured by the production of successive host crops and favourable weather.

To help slow down the buildup of infested crop residues a crop rotation away from cereals to non-hosts, including canola, pulses and forage legumes should be considered for at least 2 years. This will allow enough time for infested residue to decompose before the next cereal crop is seeded.

Using the least susceptible varieties will help to reduce the risk of fusarium head blight and perhaps the potential for buildup of F. graminearum. For more information on FHB reactions of registered cereal varieties see the Varieties of Cereal and Oilseed Crops for Alberta document.

Producers growing small grain cereals under irrigation may be able to reduce the risk of head and seed infection and mycotoxin contamination by careful water management and integrating this with crop rotation, choosing a resistant variety if available, and using fungicide if warranted. If possible, irrigation should be avoided during the flowering period to help prevent humid conditions that favour infection. In addition, it is recommended that producers consider increasing seeding rates, which helps to reduce tiller formation and shorten the flowering period for the entire crop, thus reducing the time that irrigation should be avoided. For further information on using irrigation management to minimize FHB, see the following:

In-crop fungicide application may be considered, but may only provide suppression of the disease at best. Application before infection, as well as sprayer and nozzle settings, will be critical. Consult provincial chemical guides and extension publications for more information.

Further information regarding fusarium head blight can be obtained through your local extension representative or at a number of internet sites including: 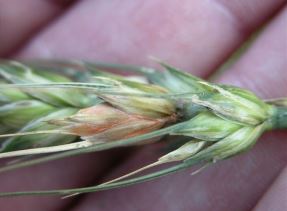 Stop Fusarium Before it Stops You

Fusarium graminearum is a serious cereal disease that has been spreading across Alberta. Learn how to manage it.